The threat from space:NASA & the Bible Say "Pray" 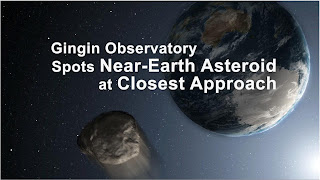 
This illustration shows the asteroid 2012DA14 flying safely by Earth, as seen by the Gingin Observatory in Australia around the time of its closest approach on Feb. 15, 2013. At this time, the asteroid was about 17,150 miles above Earth's surface.

When asked what should we do if we found out today that planet Earth would be struck by a large asteroid in just three weeks, a NASA official answered “Pray!”


Tuesday, March 19, 2013 the “Science, Space & Technology Committee” of the House of Representatives held a congressional hearing.  The hearing was titled “Threats from Space: A Review of US Government Efforts to track and mitigate Asteroids and Meteors.”  Prompted by the meteor that unexpectedly  struck Russia on February 15, 2013 and asteroid 2012- DA14 passing very close to the Earth on the same day, the committee asked NASA, Air Force and White House officials our options for dealing with the threat from meteors, asteroids and comets.  Speaking of the two cosmic events of February 15, Congresswoman Eddie Bernice Johnson (D-TX) said these events “… serve as evidence that we live in an active solar system with potentially hazardous objects passing through our neighborhood with surprising frequency.”


Congressman Bill Posey (R-Florida) asked NASA Chief Charles Bolden what NASA would do if a large asteroid headed on a collision course with Earth was discovered today with only three weeks before impact.  Space agency Chief Bolden said, “The answer to you is ‘if it’s coming in three weeks, pray.”’


“Pray!”  Many people including the reporters from major TV networks were surprised to hear this choice of words from the Space Agency chief.  Interestingly, the Bible also says to pray in response to impending cosmic bombardment.  In Matthew 24, Mark 13, and Luke 21 Jesus speaks of the end times tribulation period and tells how “the stars shall fall from heaven (Matthew 24:29 and Mark 13:25).” In Luke 21:36 Jesus then says, “Watch ye therefore, and pray always, that ye may … escape all these things that shall come to pass….”  The bombardment from stars (luminous bodies such as comets, asteroids or meteors) falling from heaven that Jesus refers to in Matthew 24:29 seems to be spoken of in Revelation 6:12-17, Revelation 8-9, and Revelation 16.   The Trumpets and Vials of Revelation give a scientifically sound description of cometary impacts that strike land, sea and air. These impacts are described as causing catastrophes that include great earthquakes, regional forest fires, towering tsunamis, magma flows and even 100 pound hailstones striking the Earth.

In my book The Comets of God – New Scientific Evidence for God: Recent Archeological, Geological and Astronomical Discovers that shine new light on the Bible and it Prophecies  (www.thecometsofgod.com) I explain that the Bible contains a virtual textbook of information about cosmic activity. Catastrophes described in the Old Testament and the New Testament’s Book of Revelation are being recognized by a growing number of astronomers and planetary scientists as descriptions of cometary impacts. Long before scientists learned about atmospheric roll back after cosmic impacts, comets carrying cyanide, and the existence of the Oort Cloud of comets that surrounds the solar system, the Bible clearly described these technical, astronomical and geological phenomena.


Dr. John S. Lewis, Professor Emeritus of Planetary Science  at the University of Arizona’s Lunar and Planetary Laboratory, and Chief Scientist at Deep Space Industries  in his 1997 book (pages 11-13), "Rain of Iron and Ice: The Very Real Threat of Comet and Asteroid Bombardment" wrote: ". . . the description of future events in Revelation leans heavily upon the phenomenology of violent cosmic events . . . The central theme is clear and unambiguous: the events described in Revelation are of astronomical origin and describe real physical events, not mere portents or symbols. Did John (the author of the Book of Revelation) somehow know more about impact phenomena than any scientist before the present decade?"


Explaining why he said “pray,” NASA Chief Charles Bolden said this is because we have “put off” proper study.  Clearly the surprise Russian meteor strike and the near Earth asteroid 2012- DA14 on the same day has let us know that we cannot put off or delay study of the threat from space.


At the congressional hearing John Holdren, senior advisor to President Obama on science and technology issues told Congress, “The odds of a Near-Earth Object strike causing massive casualties and destruction of infrastructure are very small, but the potential consequences of such an event are so large it makes sense to take the risk seriously.” Similarly, no matter how one feels about the odds of the Bible being right that comets will come to strike the Earth and end civilization as we know it; the consequences of such events are so large that it makes sense to take the risk seriously.


The US has done a good job at tracking the larger objects from space that could deliver a blow equivalent to tens of thousands of nuclear bombs and cause a global problem.  However, we are not identifying the smaller objects in the 450 foot plus range.  Referring to the Russian fly-by, Presidential advisor John Holdren said if an asteroid of this size were to strike the land, “it could devastate the better part of a continent.”  NASA Chief Charles Bolden said only one percent of the space rocks in the 90 to 300 foot range have been found.  The meteorite that recently struck Russia was only about 55 feet wide.  We are years away from identifying all of the potential threats out there and deciding how to respond to them.  This is not reassuring – indeed, pray!

Posted by thearcheologist at 9:34 AM