What was Comet Ison all about? 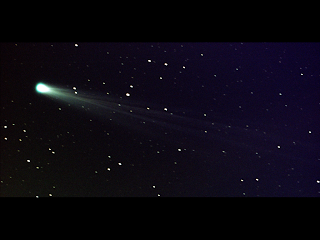 
Comet Ison put on quite a show before it disintegrated as a result of its close pass around the sun.  In the December 4, 2013 issue of NASA Science News Karl Battams of NASA says, “rather than mourn what we have lost, we should perhaps rejoice in what we have gained – some of the finest data in the history of cometary astronomy.”  Ison dramatically demonstrated the fact that we live in a cosmic shooting gallery.  It is interesting to note that a growing number of astronomers have been looking at the Bible for accounts of cometary impact and in the last decade scientific evidence for the Earth having experienced cosmic impacts during Biblical times is being found.  This evidence includes impact craters and geological materials produced by the extremely high temperature associated with impact.


Actually there are many other things scientists have recently learned about comets that have also been correctly written about in the Bible.  For instance the Bible recognized that comets have “mouths” or “vents” in their crust through which they outgas long before astronomers observed Comet Halley outgassing through vents for themselves.  Also NASA was excited to discover Comet Hartley II spewing deadly cyanide gas and that its core is surrounded by hailstones weighing upwards of 100 pounds. Few have recognized that the Bible describes how comets can produce poisonous gases and vent hailstones weighing upwards of 100 pounds (Revelation 16:21).    In the last 20 years or so scientists have learned that comets were the main source of the water in the Earth’s oceans by comparing the chemical fingerprint of the water in the ocean to the chemical fingerprint of the water in a certain class of comets.  Amazingly enough, the Bible refers to comets as the “sources of the great deep” and the “water jars of the heavens.”


Until recently, the time period between successive comet impacts of the Earth was believed to involve very long periods of time, but in July of 1994 over the course of just a week millions of TV viewers watched 21 separate large fragments (mini comets) from the breakup of Comet Shoemaker-9 hit the surface of Jupiter.  We now had proof and an explanation of how cometary bombardment can involve multiple impacts during a relatively short period of time.  Thus, it is interesting to note that the Bible in the Book of Revelation prophesies a series of seven separate cometary impact events to occur over just a three and a half year period during the end times.  What was once thought to be impossible in terms of frequency of impacts is now understood, especially if a large comet would break up into a number of pieces while approaching the Earth.  The seven impact events prophesied in the Book of Revelation are to involve impacts that occur in the atmosphere, on the land and in the sea.  The after impact effects of these impacts are to include massive earthquakes, tsunamis, blackened skies, 100 pound hailstones, poisoned waters, and skin diseases. (See http://blogs.christianpost.com/comets-of-god/is-there-scientific-support-for-the-seven-trumpets-of-the-book-of-revelation-11018/ ).  Or see July 29, 2012 in  Blog Archive here.

In the Bible and in the ancient records of the Sumerians, Akkadians, Babylonians, and Assyrians comets were referred to as a “stars” (hairy stars) and as part of the “host of heaven” (Deuteronomy 4:19).  The Bible also refers to comets as God’s “mighty ones,” “weapons of wrath” and “ministers of flaming fire.”  The Bible tells how God controls comets and brings them in from the reservoir of comets at the end of the solar system (Job 38:22-23 NIV) for correction and judgment.  The Bible has even prophesied that man’s response to comets or asteroids found on a collision course with the Earth will include efforts to shoot them down.


Comet Ison has come and gone.  Surely there will be other comets for us to observe and gain more information about the universe we live in.  To learn more about comets, and what happens after impacts it would a good idea to get a head start by picking up the number one bestselling book on the planet – the Bible.


An archeologist and a geologist, Dr. Goodman has devoted over twenty-five years to the study of the Bible. He holds a geological engineering degree from the Colorado School of Mines, a M.A. in anthropology from the University of Arizona, and a Ph.D. in anthropology from California Coast University. He also earned a M.B.A. from Columbia University Graduate School of Business. He was accredited by the former Society of Professional Archeologists. Goodman is a Messianic Jew who was saved in 1987.


Posted by thearcheologist at 11:17 PM