Why Nuclear Weapons Are Not God's Weapons of Wrath 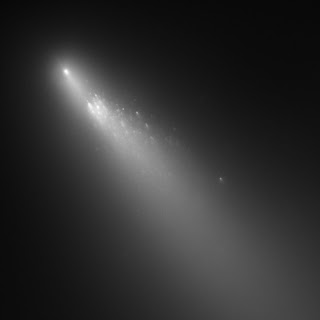 While the Bible makes reference to the Weapons of God’s Wrath (Isaiah 13:5 NIV), few Bible scholars have addressed exactly what God’s weapons are.  Yet dozens of books and scores of pastors have spoken about the part nuclear weapons will play during the end times.  Does God need man’s modern inventions to accomplish His will during the end times?  Based on the description of the disastrous events prophesied in Revelation, the weapons of God’s wrath must be able to:

Nuclear weapons are not powerful enough to cause this type of global destruction.  Even if all the nuclear bombs of the world were stacked together and simultaneously detonated, they couldn’t produce events of this magnitude.  No fault triggered earthquakes of any magnitude or volcano eruptions could cause these levels of destruction.  On the other hand, cosmic impacts, by comets or asteroids are powerful enough.  The impact of a several mile wide comet can release many thousands of times more energy than nuclear bombs.  (Depending on where they hit [air, land or sea] comet impacts can have different types of catastrophic effects.)  For example, in Time-Life’s Comets, Asteroids, and Meteorites their scientific consultants calculated what would happen if a six-mile wide meteorite (comet) crashed into the earth.  They said “the energy of the impact – equivalent to the explosion of five billion atom bombs – would transform cool blue earth into a flaming crucible.”


The impact of an approximate 18-mile wide comet produced the 312-mile in diameter Wilkes Land Crater in Antarctica 250 million years ago.  The Wilkes Land crater is more than twice the size of the Chicxulub Crater in Mexico, the crater associated with the impact that killed the dinosaurs 65 million years ago.  It seems that the Wilkes Land impactor penetrated the earth’s crust with such force it caused a sudden outflow of molten material from the interior of the Earth through the opposite side of the Earth which produced the Siberian Traps.  The Siberian Traps are a very large region of volcanic rock (basalt) thousands of feet in thickness that cover an area about the size of the lower 48 United States.  A comet of this size penetrating the Earth’s crust and exploding in the already hot interior of the Earth could produce enough heat to melt the Earth’s crust and cause every mountain and island to disappear.


Since only comets can produce the catastrophic events of the magnitude called for in the Bible, what does the Bible say about comets being God’s weapons of wrath?  Few people are aware that comets are referred to in the Bible as “stars” and as the “host of heaven.”  During ancient times the word “star” was a generic term that meant any luminous body in the heavens.   A “star” could be a hairy star (a comet), a shooting star (a meteorite), a wandering star (a planet), the sun, the moon, or a hot gaseous body.  So in scripture when we read about stars falling like figs, it is referring to meteorites or comets.


God says in Isaiah 45:12 says: “I have made the Earth, and created man upon it: I, even my hands, have stretched out the heavens and all their host have I commanded.”   From this verse the God of the Bible, the “King of Heaven (Daniel 4:37) specifically says that it is He who created comets and He alone who commands the host of comets (Isaiah 40:26, 13:3-5, Daniel 4:35, Psalm 103:20-21, 104:4, and 148:8).  Since comets can be referred to in the Bible as “snow” or “ice” or “hail” and comets can be surrounded by basketball sized hailstones, these words are also important to recognizing scriptures about God’s use of comets as weapons.  Job 38:22-23 (NIV) asks “Have you entered the storehouses of the snow or seen the storehouses of the hail, which I reserve for times of trouble, for days of war and battle?”   In other words, God says that he has set aside comets in storehouses until the times that they are needed.  This is scientifically consistent with the Hills Cloud and the Oort Cloud, vast reservoirs of comets that begin at the edge of the solar system and contain trillions of comets. In Daniel 4:35 the comets in these storehouses are referred to as God’s “army of heaven.”


So what else does the Bible says about comets?


The following scriptures are just a few that speak of God’s distinct connection to the heavens:


Concerning who created the heavens: Nehemiah 9:6 says “Thou, even thou, art Lord alone; thou hast made heaven (the solar system), the heaven of heavens (the Oort Cloud, a spherical reservoir of comets at the end of the solar system), with all their host (in this case comets).”


Isaiah 40:25-26 asks: “To whom then will ye liken me, or shall I be equal? saith the Holy One.  Lift up your eyes on high, and behold who hath created these things, that bringeth out their host by number (‘starry host one by one’- NIV, comets): he calleth them (the comets) all by names by the greatness of his might for that he is strong in power; not one (comet) faileth (‘fails to appear’ in Tanakh).”


Concerning God’s control over comets: Isaiah 13:3-7, speaks of God’s control of the comets to come during the end times, says:  “I have commanded my sanctified ones (comets), I have also called my mighty ones (warriors’ NAS - comets) for mine anger . . . the Lord of hosts mustereth the host of the battle (army of comets).  They came from a far country (place), from the end of heaven (the Oort Cloud, the spherical reservoir of comets at the end of the solar system), even the Lord and the weapons of his indignation (wrath in NIV - comets) to destroy the whole land.  Howl ye; for the day of the Lord is at hand; it shall come as a destruction from the Almighty.  Therefore shall all hands be faint, and every man’s heart shall melt.”


Comets are called by name: Isaiah 40:25 says that the God of the Bible calls the “host” or comets “all by names.”  Indeed, the name of a comet is given in the Bible.  Revelation 9:11 says that the name of the “star” that falls to Earth opening a bottomless or very deep pit, is Abaddon in Hebrew and Apollyon in Greek.  In both Hebrew and Greek this name appropriately means “destroyer.”


The author is by no means the first scientist to recognize that the God of the Bible uses comets as His weapons.  A growing number of astronomers and geoscientists have written about the connection between cometary impacts and the catastrophes recorded and prophesied in the Bible.  It is interesting that the father of modern physics, Sir Isaac Newton (1642-1727), whose theory of gravitation permitted the calculation of the movement of the objects of heaven, also believed that comets represented one of the ways that God expressed His wrath.


In the book The Prophet and the Astronomer, Physics and Astronomy Professor Marcelo Gleiser of Dartmouth wrote that Newton believed God used comets as His tools or instruments; what the Bible calls “instruments of indignation” or “weapons of wrath” (Isaiah 13:5 NAS or NIV).  Professor Gleiser wrote, “In Newton’s scheme of the world, history was punctuated by catastrophes promoted by collisions with comets through the agency of God, in what might be called a causal theology.”  Dr. Gleiser also noted that, “In his (Sir Isaac Newton’s) view, the scientist’s search for a quantitative description of natural phenomena was part of a grander quest, that of deciphering God’s plan, or mind: the scientist was a decoder of God’s writing.”


So we have looked at how the scriptures identify comets as God’s weapons of wrath.  Added support for this thesis comes from the study of the phenomenal catastrophes of the Old Testament.  These events can now be explained to be a consequence of comet activity.  There is now physical evidence for events such as the Flood, the destruction of Sodom and Gomorrah, and the destruction of the Tower of Babel being caused by comets.  For example, recently discovered impact craters such as Burckle Crater and the Amarah Crater are linked to the Flood and the destruction of the Tower.  Astronomers and geophysicists are now theorizing what could happen if the earth took a very large impact. Eerily their descriptions match the level of destruction the Bible calls for in the end times.


When we know what we are looking for, we can see that the Bible contains a “textbook” of scientifically accurate information about comets, including details of their origins, composition, behavior, and impact effects.  How did the writer of the Bible come to ‘know’ so much about comets, the great ice balls of space, before modern science?  For example, in the fall of 2010 NASA was taken by surprise when they discovered that Comet Hartley 2 was surrounded by a huge cloud of basketball sized hailstones.  Yet Revelation 16:21 refers to basketball sized hailstones, hailstones that weigh upwards of 100 pounds when it says “And there fell upon men a great hail out of heaven, every stone about the weight of a talent (70-100 pounds).”


This article is also posted on my blog at the Christian Post, The Comets of God Blog. To make or read comments go to http://blogs.christianpost.com/comets-of-god/why-nuclear-weapons-are-not-gods-weapons-of-wrath-9494/


You can learn more about comets on my book’s website:  www.thecometsofgod.com.


Posted by thearcheologist at 8:06 AM